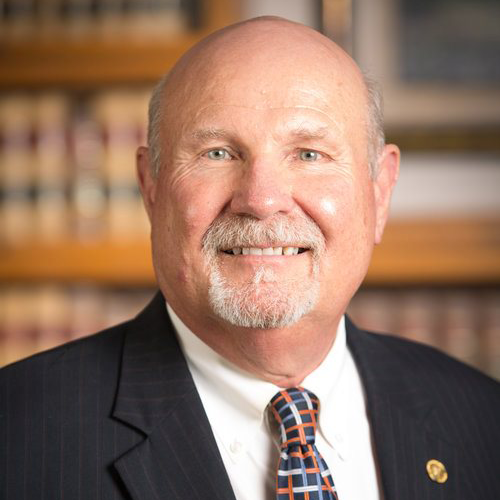 FLETCHER DAL HANDLEY, JR., is a civil justice attorney with The Handley Law Center in Oklahoma. His practice is focused on Personal Injury Law, representing those injured in automobile and trucking accidents. He also practices in the area of toxic exposure, representing Oklahomans exposed to asbestos and other toxic substances. He maintains a sub-specialty in the area of oil and gas, representing mineral owners in the sale and lease of their minerals. He is both a civil and family law mediator.

In 1975 he earned a BA in Professional Writing from The University of Oklahoma and a Juris Doctorate Degree from the OU College of Law in 1979.

Handley began his military career in 1966 as an Air Force ROTC Cadet at OU and served on active duty with U.S. Navy Patrol Squadron 11 as a P-3 Orion aircrew member from 1969-1972. He enlisted in the Oklahoma Army National Guard in 1981 and was commissioned into the JAG Corps in 1983. He retired in 2008 as the Assistant State Judge Advocate for Oklahoma and Military Judge.

He is a former member of the Council of the Tort, Trial, and Insurance Practice Section (TIPS) of The American Bar Association and has also served as Chair of the Auto Law Committee, Chair of the Task Force on Plaintiff’s Involvement, and the Plaintiff’s Policy Task Force. In 1999, he testified before the US Senate Commerce Committee in opposition to a proposed national no-fault insurance law. He served on the ABA Standing Committee on Armed Forces Law, and the ABA Working Group on Protecting the Rights of Service Members.

He was selected as Oklahoma’s Outstanding Young Lawyer of 1983 and was appointed to a temporary division of the Oklahoma Court of Civil Appeals in 1991. He has lectured throughout the United States on several areas of trial practice and was a guest speaker at the 1999 Hawaii Bar Association’s Automobile Law Symposium. He served as a Mentor at the 2002 National Trial Academy in Reno, Nevada. He is a former President of the Canadian County Bar Association and was a 9-time delegate to the Oklahoma Bar Convention.

In 2008 he was elected as an Oklahoma Fellow of the American Bar Foundation, an honor reserved to no more than 1% of all attorneys. He is a member of the Million Dollar Advocates Forum and a Top 100 Trial Attorney of the National Trial Lawyers Association. He received a Lifetime Achievement Award from America’s Top 100 attorneys and has been named as an Oklahoma “Super Lawyer” continuously since 2009.

He is a Charter Member of the International Society of Primerus Law Firms, an organization dedicated to restoring integrity to the practice of law. He was awarded the first Primerus Public Service Award in 1995 for his work on behalf of victims of the Oklahoma City Bombing. He received the Primerus Lifetime Achievement award in 2012 and is currently the Chair-elect of the Primerus Plaintiff and Consumer Institute. He was elected to membership in the American Board of Trial Advocates (ABOTA) in 2014 and was recently elected as a Fellow of the Litigation Counsel of America. He is also a member of the Public Justice Foundation, an organization that fights to insure all Americans have access to justice as guaranteed by our Constitution.

Fletcher has been a member of the Oklahoma Association for Justice (OAJ) for almost 40 years. In 2015 he was presented with the Tomy D. Frasier Lifetime Achievement Award. He currently serves as the President of the organization.

His record of service to his community includes serving as President of the Noon Lions Club, the El Reno Community Theatre, and El Reno Family YMCA. He served on the boards of the Chamber of Commerce and the Canadian County Guidance Center. He coached High School Mock Trials at El Reno high school for almost 20 years and won a State Championship in 1991. He was twice awarded the “Lamplighter Award” by the El Reno Education Association.

I will work directly with you to pursue your best solution.